Since the launch of the Apple App Store back in 2008, app users have always had an option of rating and reviewing apps. This direct and, for the developer, mandatory feedback loop is quite unique for apps compared to other software products like PC applications or web sites. So direct and instant customer feedback from Google Play and Apple App store has shaped the app business and the way we develop apps.

Ratings are the one to five stars you can rate an app. And the review is a short text where you give some feedback. And all of this is shown to all users.

And for a developer or product owner, app reviews can be something you have to learn to appreciate. One of the first apps we developed in Shortcut Denmark was a city guide for Copenhagen named “My Copenhagen”. The app was released in 2011 and the first rating gave the app 1 star with the comment “There are no recommendations for restaurants in Aarhus.”

Since then things have evolved quite a bit, and both Google and Apple have introduced a feedback option to reviews so the app reviews are now a two-way street – and an “free of charge” customer feedback channel which should not be ignored.

So ratings and reviews matter. Would you buy a new phone online from a web shop which only gets one star reviews on Trustpilot? Or would you visit a restaurant which just got a bad review and one star in your local newspaper? In the App Store and on Google Play, having no reviews or no ratings also sends a signal to potential customers that no-one has bothered downloading this app, so it is probably not worth the effort.

Here are some best practices in handling app reviews which we have learned over the years.

As a project owner you should read every single review. The reviews show how the app is used and understood by your users and it will tell you which part of the app annoys the users most. Or which features the users would like the app to have.

As a project owner you should also respond to every single review. Both the positive and the negative. You should respond because often the users actually want to start a dialogue and even users giving a 1-star review can change their mind. Also, since the conversation is public, not responding to review sends a message that you don’t listen to or appreciate your users. And who wants to use a service or a product from a company who doesn’t care about their users?

If you have an app which gets a lot of reviews, then make a system with a couple of response templates and have a fixed rhythm for reading and answering reviews.

Another reason why you should pay close attention to app reviews and rating is that a sudden surge in bad reviews or a new pattern in the problems the users report can be an indication that something is wrong and you need to take action.

Here at Shortcut we have made a service so all reviews are shown to the developers and team members of an app in the team’s Slack Channel. To be able to see this stream of customer feedback has sparked many discussions about the chosen solutions and what we could do better. 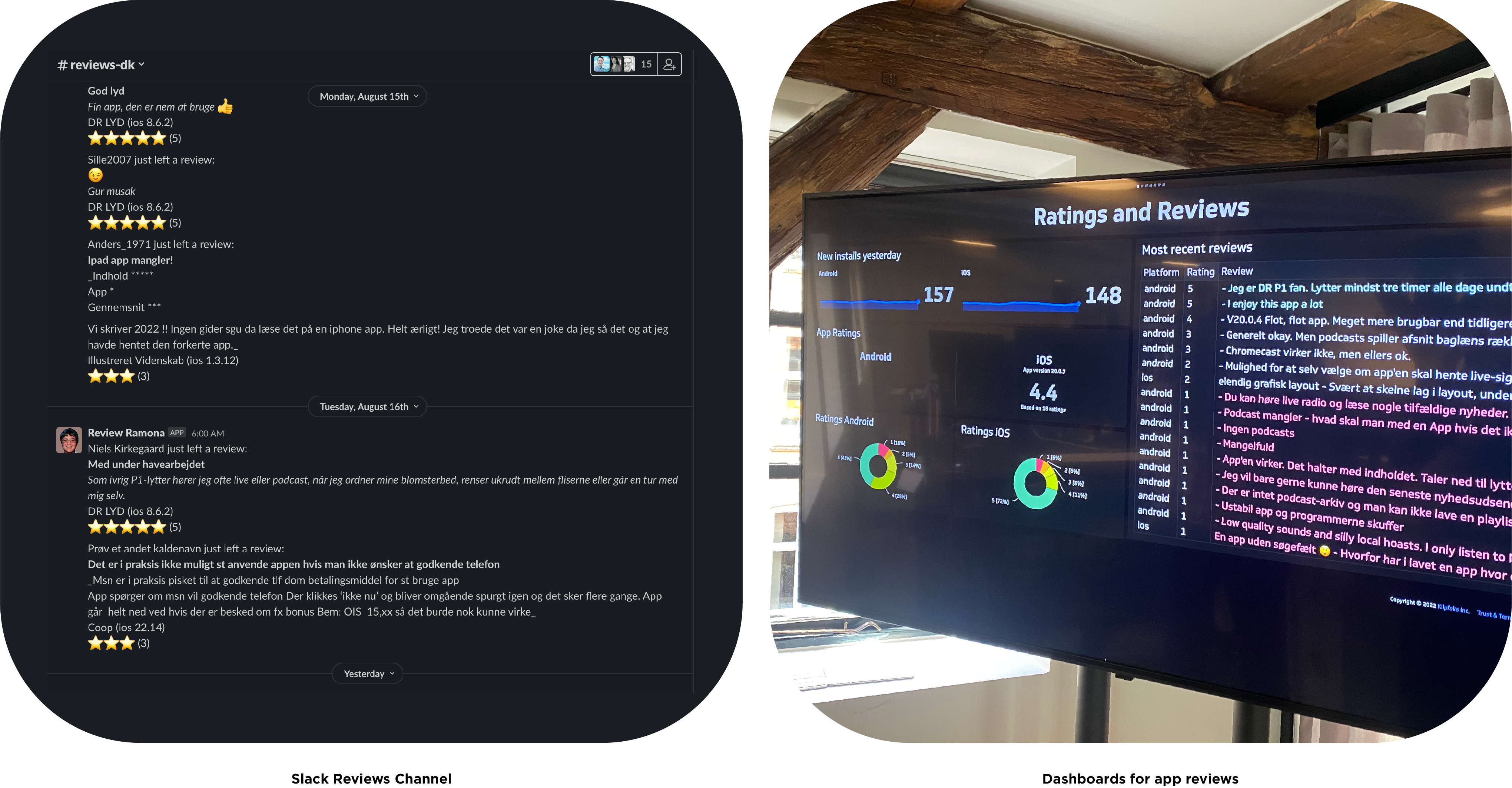 In a similar way we often create dashboards for clients where the app reviews are one of the data channels which shows the state of the app. Don’t only include the ratings, but also the reviews.

Another consideration about reviews is when and how to ask for reviews in the app. The users can always rate and review the app on Google Play and Apple App Store when they want to do this. But it is always a good idea to politely, and only once or seldom, to encourage the users to rate the app.

Here are a couple of do’s and don’ts for when and how to ask the users for reviews:

So our recommendation is to always embrace the built-in customer feedback channel, App Reviews. Make sure to respond to all reviews and somehow convey the information from the reviews to the app team. And use the built-in iOS and Android features to ask your loyal users for feedback and ratings. And, of course, use that feedback to make your app better.